Being a medical professional is a highly demanding career. So demanding that it can leave little time to manage one’s finances. In fact, a recent TD Wealth Behavioural Finance Study surveyed medical professionals and found they were 23% less likely to score well on a financial literacy test compared to other high earners.1

That didn’t surprise Jalal Ebrahim, an internal medicine resident based in Toronto. “Most often people aren’t talking about money,” he told MoneyTalk when he sat down with Kim Parlee in early March. “You are given access to a very large amount of money through student lines of credit, which doesn’t seem real because it’s from a line of credit and it’s electronic. And there can be very little oversight as to how you use it.”

But there are some simple ways that new medical professionals can stay on top of their finances without exerting too much extra brain power, says Osaze Omoruyi, a Financial Planner with TD Wealth and a member of a specialized health care team that works with many medical students and residents. He suggests these three simple rules for new health care professionals who are learning how to tackle their own finances:

Hundreds of thousands of dollars of debt may seem overwhelming, but Omoruyi says you might consider consolidating government loans and high interest debts into a student line of credit, which could lower the amount of interest you will pay. “While in school and during your initial residency years, you might only be able to afford small payments toward your debt,” says Omoruyi. “You might consider a conservative approach to paying down that debt during your initial residency years, but consider gradually increasing payments post-residency as your income increases.”

No one wants to be a hermit and only hit the books, but Omoruyi says to consider reducing discretionary expenses such as eating out and entertainment. “Some graduates will also take advantage of the Tuition Tax Credit, which you can carry forward and apply during the initial years of your residency,” says Omoruyi. “This may help you pay less tax overall and keep more money in your pocket.” He also suggests having a personalized financial plan, and reviewing it at least on an annual basis, to analyze the ability to save and invest.

Be prepared for emergencies

Even for those who aren’t medical professionals, consider putting aside several months of expenses for unexpected situations. “An emergency fund can be held in a Tax-Free Savings Account (TFSA) which can allow the money to grow tax-free while it’s not in use,” says Omoruyi. “Talk to your advisor about a safe but accessible investment that can be held within your TFSA. While, it might seem daunting to come up with that money all at once, Omoruyi suggests using an automatic savings plan to set aside money every month. 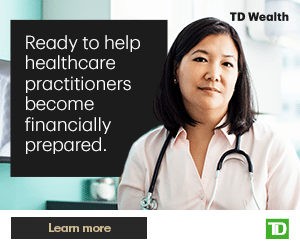